By morning the wind was under 10 knots and we were ready to see new territory. About 12 nm up the river we arrived at West Point. It was fun to see it from the river after having toured the grounds yesterday. The weather had settled to “Vicki Water” and the river scenes with the shear rock walls was a something to remember.

A small part of West Point from the Hudson River looking Northwest.

There was nothing ashore we wanted to stop for so we continued cruising up river. For the first five hours the current was with us from a rising tide. The last hour was bucking the river and tidal current so it was time to find a resting place for the night. We are amazed that the tidal current and rise and fall are still so evident this far up the Hudson.

We had decided to stop at the CIA. Yes, the CIA. Not the one you are thinking about but the Culinary Institute of America. This place has the reputation of providing the premier culinary training in the country. As part of the training they operate about five different restaurants so the students can get exposed to all aspects of the restaurant business. We called and made reservations at the French Restaurant “Bocuse”.

Hyde Park Marina is the closest to the CIA so this is where we stopped. It is not much of a marina and had no slips to handle boats bigger than about 24’ so we stopped on the outside of the harbor alongside the fuel dock. As they were not really open for the season yet we had no amenities and the cost was reduced.

Traveler came in about a half hour behind us and they too wanted to go to the CIA. We rented a cab and went together. We were able to meld our two reservations so sat as a group of six. It was a memorable meal both from the food and the fellowship standpoint. We surely enjoyed the company of the Weavers and the Moorsheads. 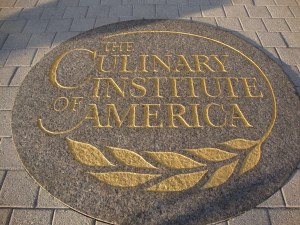 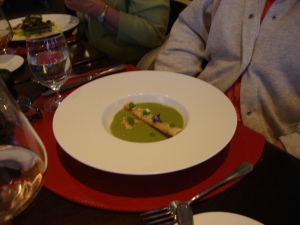