The weather report forecast 20-40 km winds with a 40% chance of rain. We decided to travel in any case as half of our course would be in protected water behind islands and the other half would just be rough. The rough part was 1-1.5 meter wind waves on our beam but was not bad enough to be of concern.

We threw off the mooring lines at 0900 and wound our way through beautiful channels and islands for the first five miles. Once we entered the open water of Georgian Bay it turned out that the forecast was pretty much right on and we had the beam sea expected. We slugged it out for the next two hours with an occasional opportunity to duck behind an island or two for a break. It was really interesting when the course went through very narrow openings in rocky shores with the waves crashing on the shoreline and wind pushing us on shore. Some of these openings were maybe 80 feet wide so lining up with the middle of the channel was important.

A bit about the N.E. shore of Georgian Bay which is the southern portion of the north half of Lake Huron. They call this the land of 30,000 islands and not without reason. I don’t know if anyone knows how many exposed pieces of land there are in this region but it is so many that a lifetime would not be enough time to explore all of the channels. Without navigation aids a first time cruiser would undoubtedly get lost not knowing the through channels from the ones that are dead end.

Fortunately for us, we have paper charts, a chart book, two iPads, two iPhones and two Raymarine Multi Function Displays all of which have the cartography needed for the area and there are lines drawn on the cartography of all of these items showing us where the main channels and optional channels lie. The trick is to follow these lines religiously and if there is a junction of the lines to know which one you want to follow. Otherwise making progress toward your goal would be impossible. At times, when the channels get very narrow and/or crooked it is nice to be able to zoom in for detail or out for the overall picture. I follow the electronic charts while Vicki follows the paper charts and advances little sticky arrows on them to show our position. As we pass navigational bouys she compares the numbers on actual bouys with the numbers of the bouys on the chart to verify our position. We are so fortunate to have all of the navigational aides available today. This trip would have been much more difficult to do back in the 60’s when we first started boating together.

We found Twelve Mile Bay and about a mile into the bay we found Wani Bay, our goal for the days mooring. This was to be our first time at anchor on the entire trip. Always before we were either on lock walls or in places where protected anchorage was not easily available so we went to marinas. Sea To See has a very nice windless that feeds the anchor rode both down and up. This is unlike the Mei Wenti where the windless only brings the anchor rode up. I pushed the down switch and just like magic the 80 feet of chain was fed out in the 14’ of water depth while the wind blew the boat backwards laying the anchor down in the correct position and the chain out in a line on the bottom. The anchor dug into the bottom perfectly and we were in great shape, with a 4:1 scope for the 10-15 mph winds we had all afternoon. 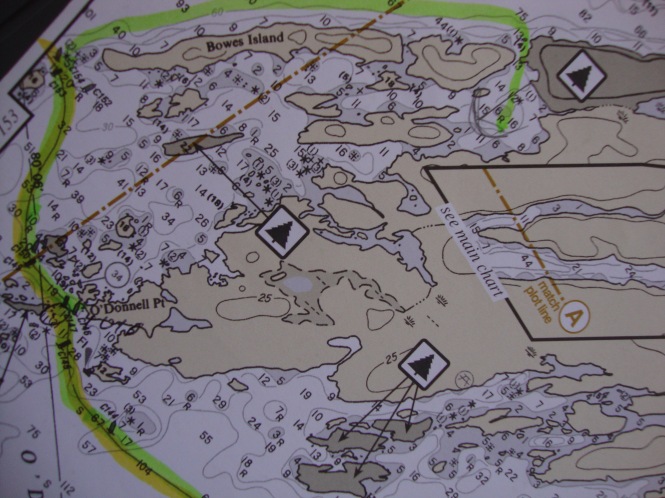 Wani Bay was a great anchorage with good holding bottom. For some reason half the charts do not have it labeled

The wind continued to blow into the evening and the cloud cover was pretty solid but we still had an enjoyable time relaxing, reading and napping.