Now that the engine room was cooled down it was time to get down there to see if I could tighten the belt. I got up at 0530 to give it a go. I found that it was looser than I thought it should be so loosened the bolt on the tensioner but found that the alternator was stuck in its current position. I needed something to pry with and it would have to be the right instrument as the room and angles available were limited. I tried tools I had available and then decided to go topside to see what else I could come up with.

When I went out the door to the cockpit I found what at first looked like sawdust all over everything. On closer examination it was the little bugs that had been plaguing us the night before. They were dead and laying by the thousands all over everything. In some places there were multiple layers piled up. Yuck! 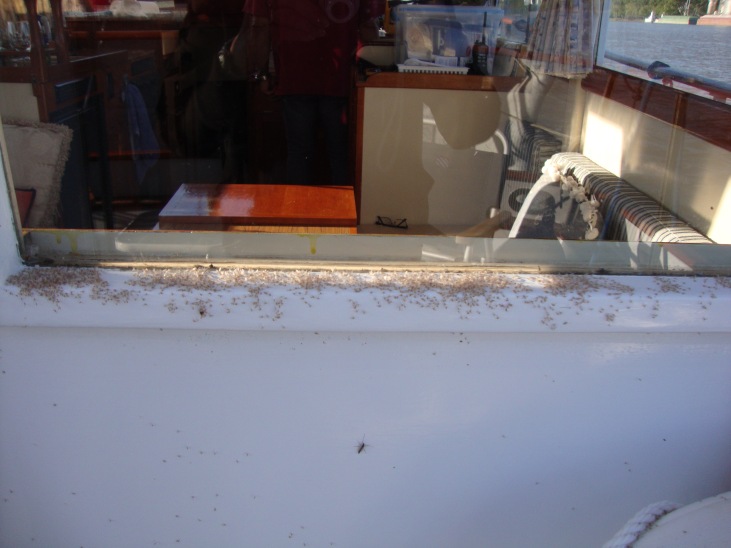 Look at the sawdust all over the window ledge. It is bugs! Sometimes we think the biggest challenge of this trip is the different kinds of BUGS.

When I was rounding up other tool possibilities Jim came along in the dinghy on his return trip from taking Sammy ashore. He asked how it was going with the belt and I told him I needed a tool with which to pry. He said he would see what he had and returned with the handle for his windless which is about two feet long and solid metal. This was just what was needed and I was able to pry the alternator to a position where Jim and I both agreed the tension on the belt was perfect. I then used the belt dressing Jim had brought over from Namaste, turned the engine over so the dressing could be applied over the length of the belt and called it good.

I fired up the engine and no squeeks! We pulled anchor at 0715 and headed down the channel to the river. When we were back on the cruise line in the river channel I slowly opened the throttle to normal cruise rpm and no squeeks. We were good to go.

This was to be a 30 mile jaunt to Grafton and all went well until we hit a patch of carp. They began jumping all around the boat and several hit the sides. Then one decided to deposit his body in the cockpit again. Aaaarggh *@%*^%#. This time I wasn’t going to let it continue to flop around spreading blood all over everything. I grabbed the pointed knife and screwdriver, stuck the thing in the head and held it down while slipping the screwdriver into its gills. Thus I was able to lift it up and over the rail. The blood was contained to one side of the cockpit and a couple of chair legs.

We passed four tows coming up river. I was able to see them coming around the bend with the AIS so had plenty of time to be on the edge of the channel before their arrival. Along the way we ran into a ferry operating from bank to bank. This was the second of its kind I had seen. The car portion is a barge with a ramp on both ends and the propulsion is a pusher type tow boat. When they are ready to change direction the tow boat just rolls its bow along the barge from one side to the other and they are off. 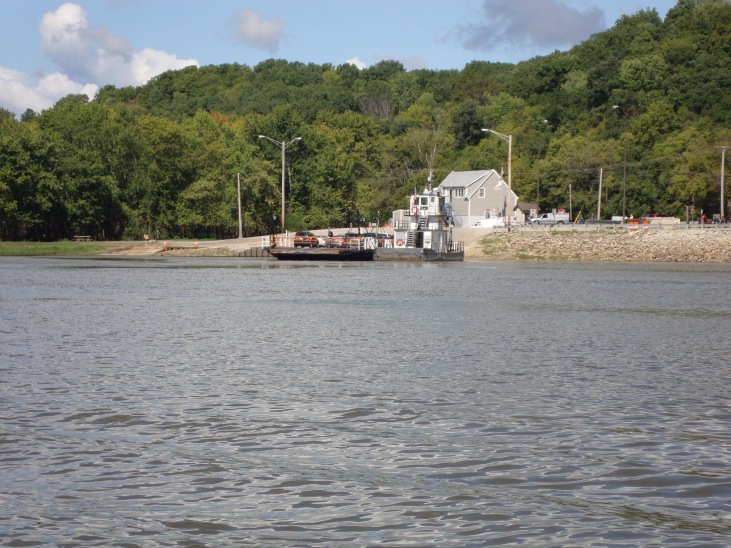 Ferry across the Illinoise River just before Grafton, Illinois where the river meets the Mississippi. The ferry is really a tug and barge.

We made it to Grafton Marina by 1100 hrs. and pulled in to take on diesel and get a pump out. I was pleased to see the fuel consumption per mile was unchanged even though we had been waiting around at locks for significant time. I guess this was balanced by the boost in speed provided by the river of around 0.5 mph.

I pulled out the shop vac and vacuumed the entire exterior of the boat to get rid of all the little “sawdust” bugs. Then Vicki vacuumed the interior. When finished with the boat cleaning it was time for a good shower.

We walked along the main street of Grafton checking out the shops and stopping for a wine tasting. We then called a shuttle that took us to Aeries Riverview Winery where we had dinner and a view from about 250 feet elevation above the river level. This was the highest elevation we had seen in some time. Good dinner, good company and then it was back to the boat where the band from the restaurant/bar above the marina office kept us awake until after 11:00 PM.