This short cruise to a beautiful anchorage took place mid morning. On the way we poked our bow into an unnamed bay that had a deep pool right in front of a very nice waterfall. A lone fisherman was fishing right in front of the falls but was kind enough to move to the side so we could take a picture without him in it. 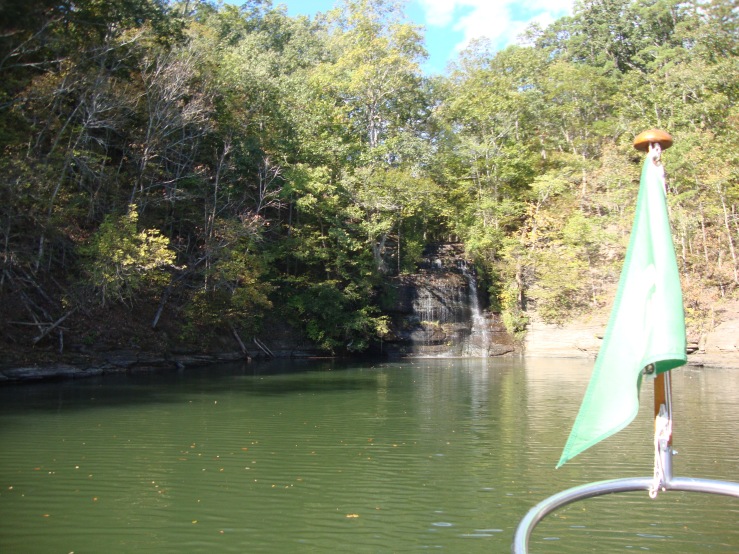 Nice little waterfall in a small bay off of Pickwick Lake.

Vicki got a call from her college friend June asking where we were. It turned out that June and her husband Art were on a trip to Springfield, Missouri and then St. Louis and were going to be heading back to their home in South Carolina. When they found out we were going to be in Florence they decided to stop by there to see us even though it was going to be a little out of their way.

Upon arrival at Panther Creek Anchorage we found two arms at the head of the bay and took the southern arm until we reached about eight feet of water. There the anchor was set and I backed down on it to make sure it was buried. There was one trailer and picnic table on the eastern shore but they were quite a ways away from us so we had near total privacy. The sun shone, it was hot but there was a nice breeze until late afternoon.

We had the anchorage to ourselves other than a few fishermen moving through on occasion. It was a great time to read and relax until the breeze died down and then the bugs drove us inside the boat. We didn’t start the generator and put on the air conditioner but the inverter ran the fan enough to make us reasonably comfortable.