We were planning to leave the moorage at sunrise (0617) but two other boats left before this time. It was about three miles to the Coffeeville Lock and Dam and we heard them contact the lock on the radio. The lockmaster told them to come on down and he would have the gates open. We figured if we didn’t make this locking it would be at least another hour before we could get through and maybe more as there were signs that a tow was coming down river in the next hour.

We quickly got unraveled from all the lines on each side of us and contacted the lock master to let him know we were headed there as fast as we could. There was a thin layer of fog, about 20 feet deep” on the river so visibility was poor. We soon lost Namaste in the fog so slowed down until they caught up. We turned on our anchor light and back deck light so they could see us through the fog once they got close enough. The lock waited for us and we locked through with four other boats besides Namaste. This was our last lock on the Tennessee-Tombigbee Waterway with a drop of 34 feet. We have lost track for sure but best I can recall we have past through 130 locks so far on this trip. That is a lot of up and down.

Today was a long run so we were glad to have the current with us. We pulled into Three Rivers Anchorage at 1345 to find a very beautiful but narrow channel with plenty of depth. The trees overhung the channel sides and nearly overlapped Sea To See. As the channel was so narrow we anchored fore and aft. This time I took the trouble to dig out my auxiliary anchor and dropped back on the main anchor to put this over the stern before pulling back up between the two. 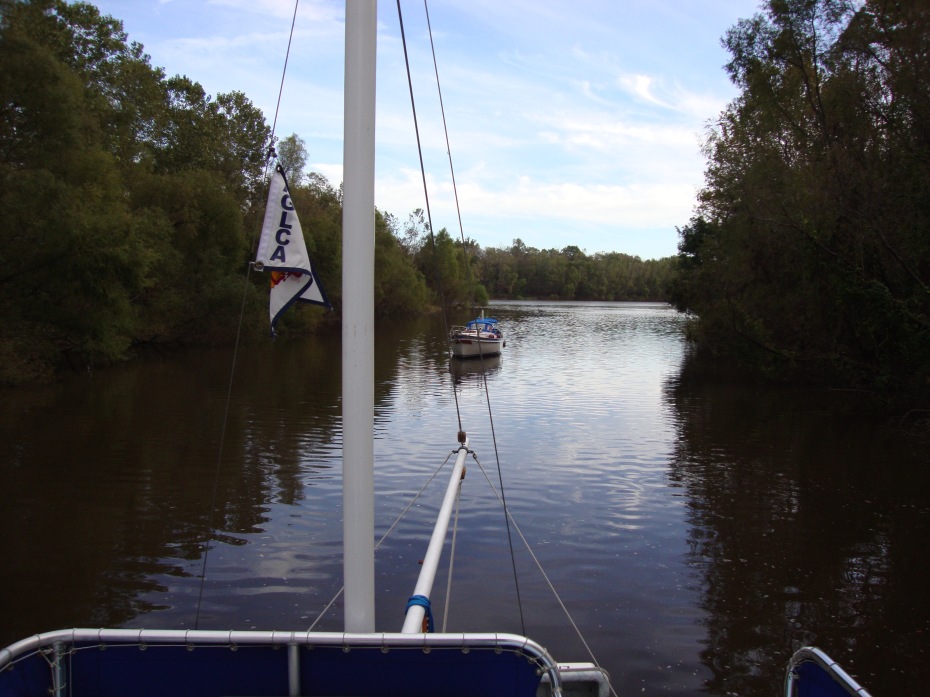 As can be seen from the angle of the chain anchor rode there was significant current here to hold us in place.

It had been an eventful day in the lives of the two boat crews as Jim and JoAnn found they had a new grandson “Cedar” and we were getting news of our grandson Trevor running in the NCAA Regionals for Pepperdine University. What fun to be grandparents out playing around while others are building lives.