Went to the pool in the morning then it rained like stink all afternoon.

The wind began blowing from the northwest in the middle of the night and since the harbor entrance faces north we were in line with all of the waves generated from across the Gulf of Mexico. We spent the next two days rocking and rolling.

We toured the neighborhood by walking to Home Depot, having lunch at the Cracked Conch Café, going to Walgreens, visiting Lydia next door at the Blackfin Marina. It was a downpour during the second half of this tour but then it let up later in the day so we went to the pool where I established a lap routine. The goal will be to add a lap each day while here to build endurance and to strengthen the left knee.

We are enjoying our stay at Marathon because of the temperature even though it has rain a lot so far and the wind is still blowing out of the north making the boat a carnival ride. After a walk for breakfast at the Conch Café and a trip to Publix I did my pool laps while the sun was shining.

A Cigarette boat from Miami came next to us from Miami. Even though the wind was still blowing and the waves were substantial they had come to Marathon at 60 miles per hour – a little faster than Sea To See travels. The occupants of the boat were from the Virgin Islands and we enjoyed their accent.

The wind blew from the north all day.

It was basically another lazy day at the Banana Bay Resort and Marina. I did walk the three mile round trip to West Marine to buy a 50’ 30 amp shore power cord so I could give the borrowed one back to its owner.

The wind continued to clock around to the north east and this made a marked improvement of wave action within the marina.

We had been waiting for another boat to leave the marina so we could take its spot for more permanent moorage. This happened in the morning so by noon we had permission to move and did so. This time we backed into the slip so we could get on and off the boat without climbing over the rail. Unfortunately this meant we had a choice between putting the dinghy down and leaving it in the water to get barnacles on its bottom or leaving it up and not having access to it as it would be stuck between the boat and the fixed pier. After much cogitation we finally decided to leave the dinghy up and back in eliminating dinghy access. This beats having barnacles on our bottom covering the name and homeport. 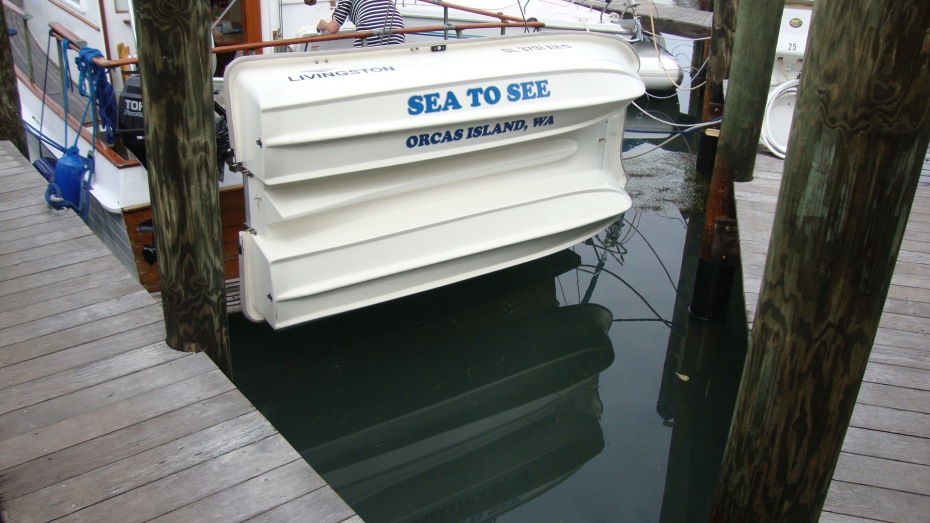 The V in the docking situation that prevents dropping the dinghy.

After a very nice pool day, though cloudy much of the time, we returned to the boat to work for hours on all of the mail that had been sent to us from our mail handler on Orcas Island. It was fun to finally read our Christmas cards and important that we go through financial statements.