We had arranged for Arthur and June Fusco to meet us at Georgetown and ride on the boat up the AICW as far as the Wacca Wache Marina.   They had come down to the Murrells Inlet area for a weeks stay by the ocean so were close by. 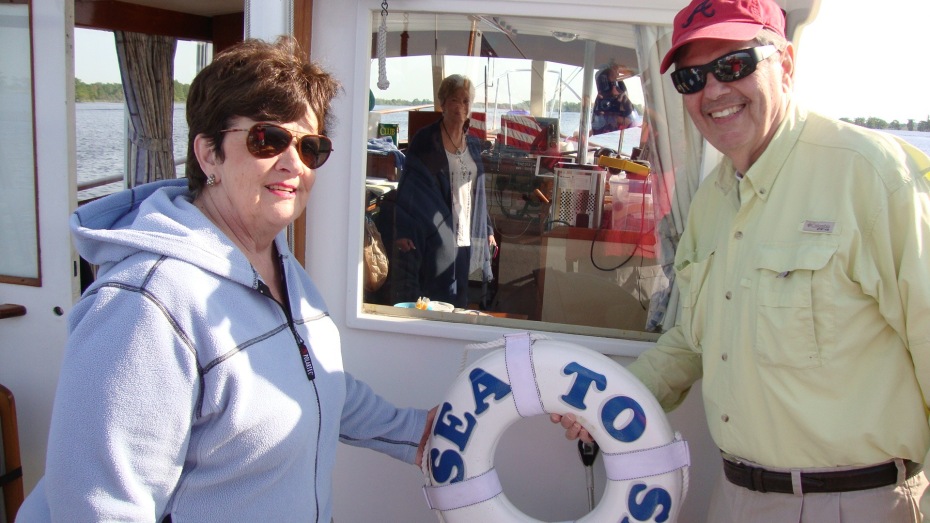 June and Art Fusco joining us to be our first passengers underway.

We pulled away from the dock at 0805 and headed out of the Georgetown Harbor in Vicki water. The entire trip stayed that way with flat water, a current assist, sun, very little wind and a high tide. It was an idealic day to match the day the Fusco’s joined us aboard the Mei Wenti in the San Juan Islands. I think they may have the impression that every day aboard a boat with us is just like that.

We stopped at Wacca Wache and had lunch at K-Rae’s Waterway Bar and Grill with the Fusco’s and some friends of theirs that had come to pick them up and take them back to their car in Georgetown. It was a nice lunch with good friends on an outside patio in beautiful sunshine with a light breeze.

We said our goodbyes and headed back up the AICW on the Waccamaw River. It was only about seven miles to our intended anchorage so we were there by mid-afternoon. I dropped the anchor and backed down on it but it wouldn’t set. It was pulled back up with the windlass and dropped again. When I backed down on it it still would not set. Up it came again and this time I left the helm to examine the anchor to see what might be the problem. I found a rope stuck through the flukes and when I pulled the rope up found another smaller anchor on the end of it.

I assumed this was the problem but moved the boat to the other side of the anchorage and tried again. No Luck. I tried twice more and still could not get the anchor to set. I was mystified and would have blamed the bottom except reviews for the anchorage talked about a good holding bottom.

By now confidence that we would get a good anchor set here was minimal and time was going by. Since we had planned to stop at the Osprey Marina the next morning for fuel we decided to call and see if they had room for us to come in this afternoon. It was only about four miles away and they did have room so off we went.

We pulled into the Osprey marina, fueled up and then they told us to just stay on the fuel dock for the night. We discovered a couple other looper boats were there and along with other transcients we had a gathering on the veranda prior to dinner aboard. All in all this was a very nice stop and we would come here again.